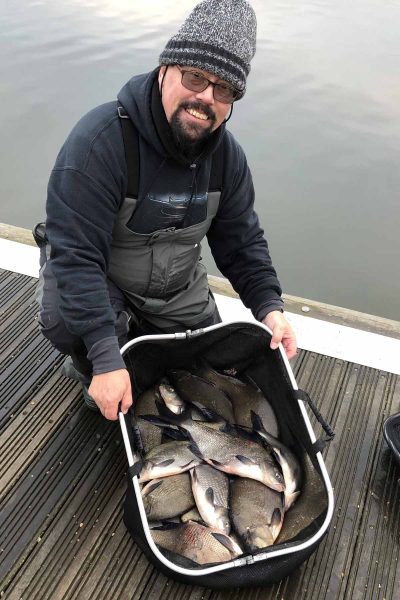 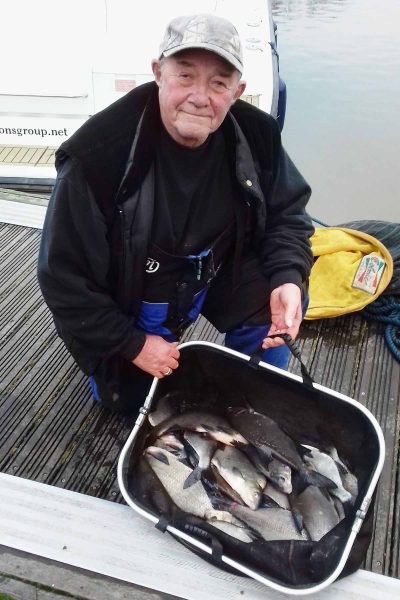 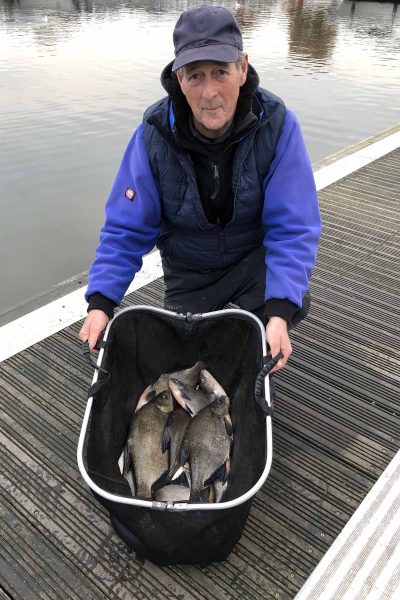 With a miraculous turnout of 23 hopefuls after two very hard weeks, everyone was trying to guess where they wanted to draw!!! With the weather virtually ideal with cloudy conditions, a light south wind and no frost…….(I know we had all that last week!!)…… it looked like we might be on for some fish but what actually happened took everyone by surprise. Harry Barron made it 2 wins on the spin this week and has blown the “20” club clean away to be the only member in the “30” club (which was very nearly the “40” club)! Harry had a great net of bream/skimmers from his peg on then Crane basin (where you couldn’t buy a bite last week) for a runaway win with 37lb 15oz.

Now switch basins to the big basin where Dave Dearman caught 19 bream/skimmers for his 2nd place net of 25lb 8oz and another great days fishing.

Back to the Crane basin where Terry Smith, on the peg next to the winner, had 23lb 10oz of similar bream/skimmers for 3rd place.

There were another 6 double figure weights and John Hehir had a bream of 3lb 10oz in his net of 10lb 4oz. But as always at the boatyard if you weren’t on the fish it can be very hard and if you happened to draw the river pegs this week it was a very long 5 hours as the 3 of them sat biteless despite all their best efforts. Jon Burton is talking about taking art evening classes in an effort to improve his drawing

This week was also the singles KO 2nd round here are the results.

Next week its the Ida Livard cup, lets hope the fish are still feeding and the weather is kind…………………See you there…..

This website uses cookies to improve your experience while you navigate through the website. Out of these cookies, the cookies that are categorized as necessary are stored on your browser as they are essential for the working of basic functionalities of the website. We also use third-party cookies that help us analyze and understand how you use this website. These cookies will be stored in your browser only with your consent. You also have the option to opt-out of these cookies. But opting out of some of these cookies may have an effect on your browsing experience.
Necessary Always Enabled
Necessary cookies are absolutely essential for the website to function properly. This category only includes cookies that ensures basic functionalities and security features of the website. These cookies do not store any personal information.
Non-necessary
Any cookies that may not be particularly necessary for the website to function and is used specifically to collect user personal data via analytics, ads, other embedded contents are termed as non-necessary cookies. It is mandatory to procure user consent prior to running these cookies on your website.
SAVE & ACCEPT